Frequency of Usage of Quant and Qual Research Methods

I’m just about to start analyzing my section of the most recent GreenBook Research Industry Trends Report, but before I do I wanted to share again some of the findings from the last report. The GreenBook team conducted a global survey of 2,087 researchers.

Despite many online methodologies, qualitative research – unlike quantitative research – is primarily a synchronous, person-to-person phenomenon. Respondents were asked to identify the research methods they use the most (up to five methods per respondent). The top four methods are focus groups (a key method of 68% of qualitative researchers in the past year), in-person In Depth Interviews (53% have used IDIs significantly), telephone IDIs (31%), and in-store observations (25%). Asynchronous, online interactions range in popularity from interviews using online communities (25%), to mobile studies (24%) and bulletin-board studies (21%).

Only 8% used blog monitoring as one of their go-to qualitative methods, which is a surprise given its ability to be conducted passively and with no external costs outside the researchers’ time. 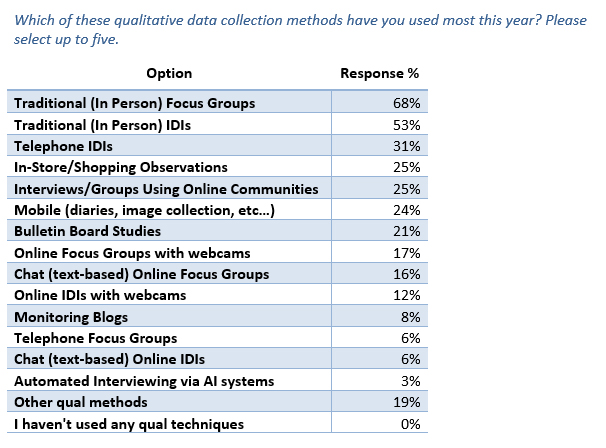 Quantitative, in stark contrast to qualitative, is dominated by impersonal, asynchronous automated methods: 88% of those researchers who have done quantitative research include online surveys in their Top 5, followed by 44% with mobile surveys. (Postal mail and IVR  are not widely used: 11% cited mail surveys, and just 4% have used IVR surveys.) Traditional CATI (Computer-Assisted Telephone Interviewing) is a prime method of 39% of quantitative researchers. 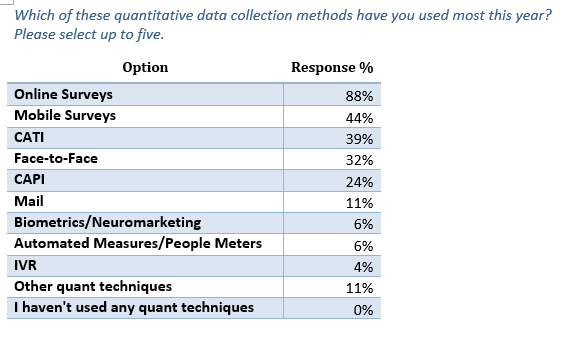 You can download the GRIT report from here. Doing so will also make sure you are notified as soon as the new report is released.