The Most Superstitious NFL Fan Bases

The least superstitious fans were those of the Cleveland Browns (22%), the Kansas City Chiefs and the New England Patriots (both 24%).

Franchise traditions of winning or losing don’t seem to affect the level of superstition around their teams. 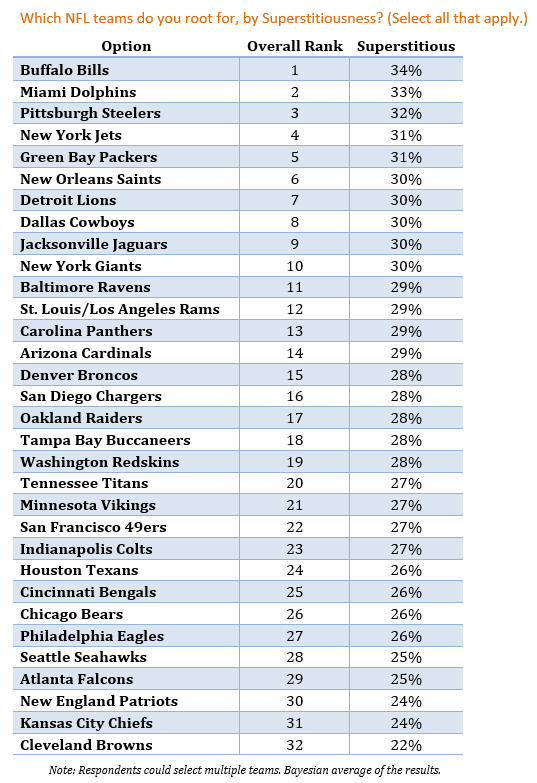 20% of people will only watch the game with certain people, while 17% said they have to wear certain articles of clothing:

Some feel that they must watch the game in order for their team to win (10%), and 9% avoid saying things, such as one Detroit Lions fan who said, “Never say it’s over”. Another Lions fan, one that makes up 8% of respondents, said that specific foods and drinks must be had during the game, stating, “It’s nothing super crazy but I always make the same food for my boyfriend when his team is playing.”

While some feel they need to watch with some people, other can do without certain people, saying they will not watch the game with specific persons (3%). Other must have their favorite chair, or sit in a certain location (4%). 3% of others had a handful of other superstitions they follow:

Despite being a fan, 2% of respondents refuse to watch the game in order for their team to win:

Interested in more data and examples? You can download this free study, Sports Superstitions & The Big Game: How American Fans Believe They Influence Their Team’s Chances, here: