Frequency of Usage of Quant and Qual Research Methods – 2016 Results

In the 2015 GRIT survey, we learnt that 79% of researchers used qualitative research in 2015, and 90% used quantitative research – in fact, 68% of researchers used both qual and quant. With the age of pure qual or quant research ending, we wanted to better understand the mix between the two with the 20th edition of the GreenBook Research Industry Trends Report, which fielded in Q3 and Q4 of 2016 and collected 1,583 responses from participants in 76 countries.

Those who used quantitative research were asked to rank the data collection methods they had used the most in 2016.

How big of a sway do online surveys have over quantitative research? Over two thirds of researchers (69%) ranked online surveys #1, compared to just 9% who ranked CATI (Computer-Assisted Telephone Interviewing) #1. While 8% ranked F2F (face-to-face) interviews #1, placing it third for #1 votes, most researchers ranked it far lower, pushing its overall rank down to #5.

In contrast, mobile surveys were ranked #1 by the fourth-most researchers (5%) but came in second overall, with 40% ranking it #2 in usage. 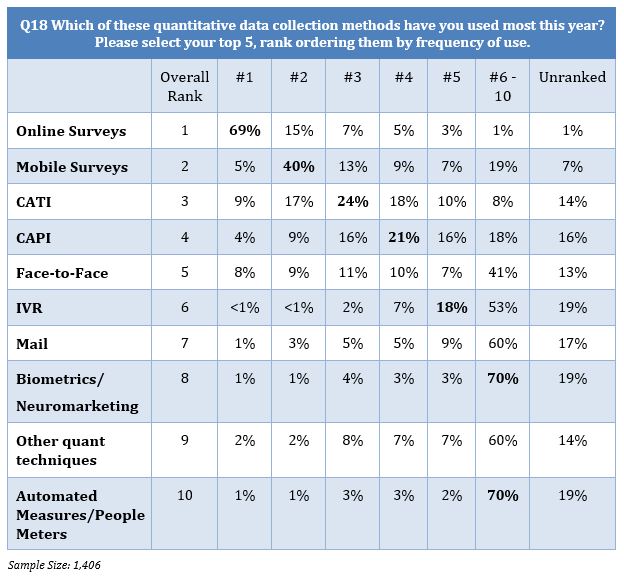 The least used techniques were mail, biometrics, and people meters.

Focus groups were the most used technique of nearly half (46%) of those researchers who had performed qualitative research in 2016. The second-most used technique was in-person IDIs (In-Depth Interviews), ranked #1 by just 14% of researchers. While telephone IDIs are ranked #1 by the third largest group (11%), this is a niche technique with lower rankings in general, pushing it down to #5 overall, after online focus groups without webcams (#3), and online focus groups with webcams (#4). 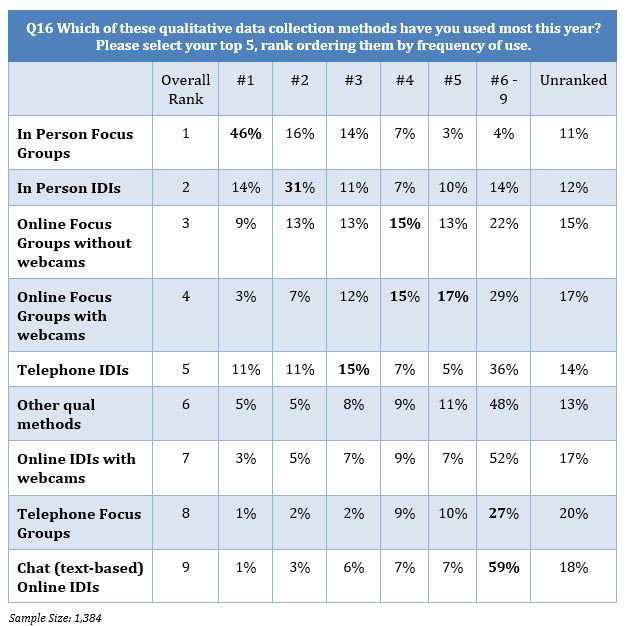 Researchers were asked to rate emerging qualitative techniques in a separate exercise. Of these techniques, discussions using online communities were the most used (21% ranking it #1), with 15% ranking mobile qual #1, and 13% ranking both bulletin-board studies and in-store observations #1. 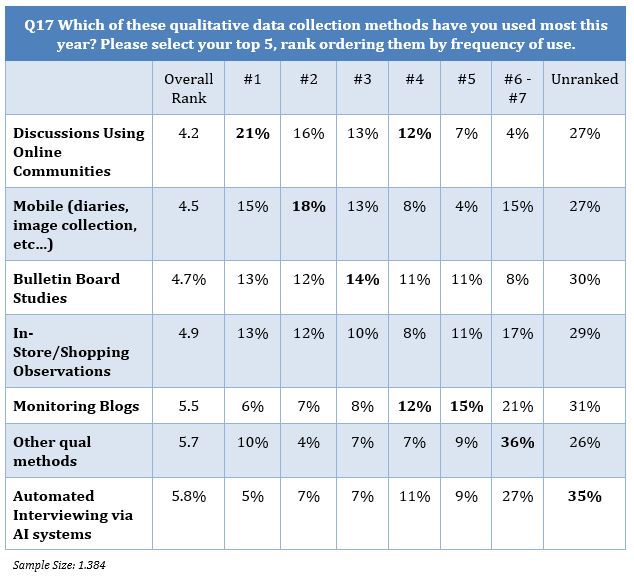 As always, there’s much more worth reading in the GRIT Report.