Looking to Census Experiments to Ask About Race and Ethnicity

Traditionally, race has been asked as a choose-one question. This oversimplifies the situation for multiracial citizens, as is discussed in detail in this excerpt from the November 2000 paper, “Measuring Our Nation’s Diversity: Developing a Common Language for Data on Race/Ethnicity“, by Katherine Wallman, Suzann Evinger, and Susan Schechter:

The most controversial and sensitive issue—and the one that continues to receive the most media attention and generate the most public discussion—concerned whether and how the standards should be changed to classify data on individuals who have parents of different races and who wish to identify with more than 1 race.

Sample surveys were designed to test the effects of a category labeled “multiracial” and to test alternative approaches for permitting respondents to select more than 1 race. The research conducted under the auspices of the interagency committee indicated that less than 2% of the population selected 2 or more races when given the opportunity to do so but that the proportion of the population identifying with multiple racial heritages seemed to be growing. Furthermore, research indicated that a considerable number of respondents were selecting more than 1 racial category even when instructed to choose only one and that there was not a shared understanding of the term multiracial. The interagency committee recommended, and OMB agreed, that:

…The categories in this classification are social-political constructs and should not be interpreted as being scientific or anthropological in nature.

While we look to Census data for quota sampling to make sure our surveys are representative, we also look to them for questionnaire wording on demographic questions. Normally we would use questions that were asked in the last Census, but on race (and gender) the world of surveys is changing faster than every 10 years.

The ethnicity question we were using was inspired by a 2012 experiment that the Census Bureau did to test wording for the 2020 Census. It integrated Hispanicity into one question, rather than asking it separately. The Census has done a series of experiments and have continued to refine their approach. Their most recent recommendations for the optimal ethnicity question:

Now this is overkill for those of us not performing a census. We drop all the subchoices from the outline and all but the last open-ended field: 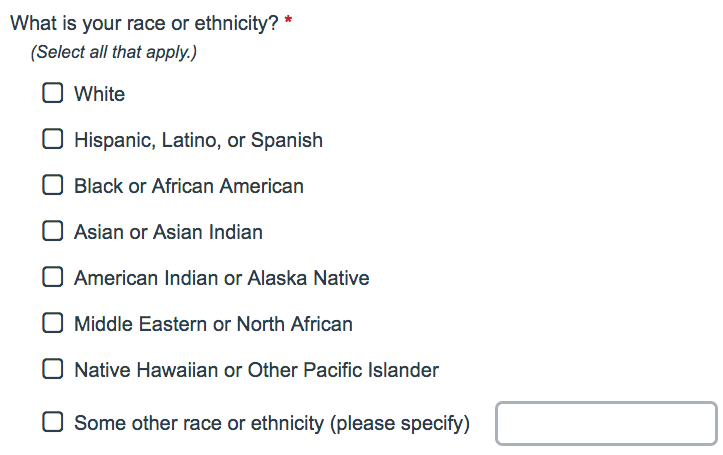 We do label the Asian category “Asian or Asian Indian” (a distinction made in the 2012 research, where these were two separate top-level categories). The research found that the instructions “Select all that apply” prompted respondents to select more options than “Select one or more boxes.”

Some respondents find questions about race and ethnicity intrusive and offensive. As a result, if they’re not needed in the screener, we will often put these among the last questions in a survey (along with age, gender, and income).