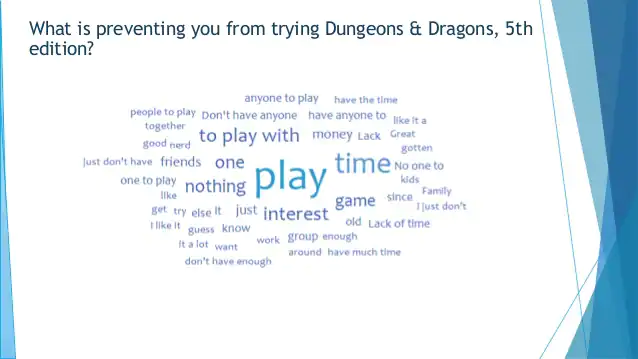 One out of five have ever read any gamebooks, such as Choose Your Own Adventure, Fighting Fantasy, Lone Wolf, or solitaire RPG adventures such as the Tunnels & Trolls series. Those 35-44 years old are most likely to have read a gamebook (39%), and 56% of those who played a TTRPG have read a gamebook.

Another 20% of online adults have ever played any text adventures or interactive fiction games on a computer, tablet, or smartphone, such as Choice of Games, Infocom, or Twine games. Likelihood of having played declines by age, from 45% of 18-24 year olds, 36% of 25-34 year olds, and 26% of 35-44 year olds; 62% of those who played a TTRPG have played a text adventure.

Extrapolating from this, approximately 32 million American adults have ever played Dungeons & Dragons, and 13 million have played 5th Edition. (Conservative assumption: since the older, less affluent, and less educated are not online, this estimate assumes offline adults have not played.)