The Forecast for Market Research Automation

The GreenBook team and assorted volunteers are now hard at work on designing the next wave of this twice-annual study state of the research industry. Which reminded me that, for the 19th edition of the GreenBook Research Industry Trends Report, I had documented the attitudes and usage of automation, and it is past time I shared that here. That survey of market researchers fielded in Q1 and Q2 of 2016 and collected 2,144 responses from participants in 70 countries.

Automation platforms are most used by researchers today for analyzing survey data (by 42% of respondents), text (by 35%), and social media (35%), as well as for charting and infographics (41%).

Automation is least used for business process tasks including project design (19%), matching suppliers and buyers (11%), and matching talent to projects (8%). (Automated analysis of biometric data is low – 10% – primarily because usage of such data at all is still low.)

While a third of respondents already use automated sampling, many were concerned about the impact of this automation on data quality. 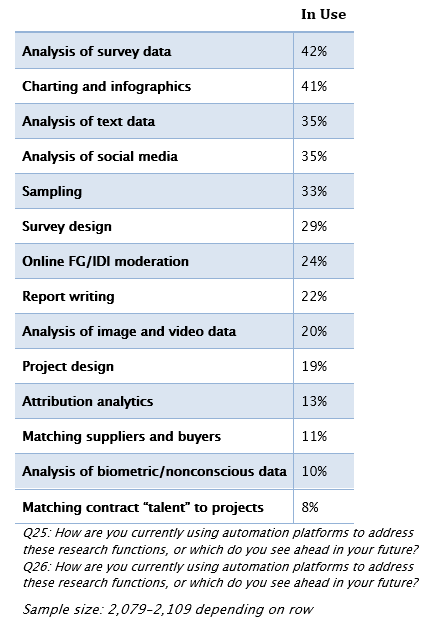 Plugging the full question data into our unautomated human analyst produced this forecast for when the majority of researchers will be using automation platforms for each of the following.

This year we expect to see charting, basic analysis, and sampling all handled by automation platforms for the majority of researchers.  In 2018, automated analysis of image and video data will win over the majority, followed by attribution analytics and survey design, with automated moderators becoming the norm by October. In 2019, more of the project-oriented tasks will automated for the majority of researchers, including report writing, project design, matching suppliers and buyers, and matching talent to projects.

This forecast was prepared by assigning a year to each answer and averaging the results: 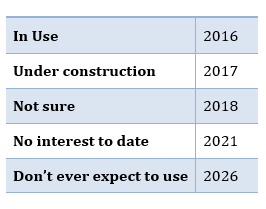 Researchers have a love/hate relationship with automation. On the one hand, 11 researchers rated firms as innovative specifically because of their use of automation. And many spoke of how they hope to use automation in the future:

But on the other hand, some researchers worried about the impact on their careers and their employers. Regarding their careers:

Fearing for their employers, some predicted automation would reduce revenues:

Others, in contrast, saw automation as the way forward. “Projects will become smarter and more efficient. Clients expect more for less. Automation will help with this.”

Automation won’t be uninvented, and – eagerly or not – more and more researchers are adopting it out of necessity.