Concept Tests that Bring Smiles to the Faces of Marketers

One of the key benefits of attending the TMRE and IIEX events one week apart was a double dose of BrainJuicer. As the company voted “#1 Most Innovative Company in Market Research” according to the GreenBook Industry Trends (GRIT), BrainJuicer always comes to the stage with sharp, new ideas.

At TMRE, Alex Hunt, president of the Americas, presented on new product concepts with Andy Smith, the director of marketing research at Hershey’s.

Alex shared an obituary for the traditional concept test. Starting in the 1960s, researchers would test the Benefits and Reasons To Believe (RTBs) for new product and service concepts. In the 1990s, concept tests would include a key insight for consumers to react to as well. The continued low success rate of new product launches, Alex argued, was because of traditional concept testing’s “failure to take into account that people make decisions – including ones about new products – unconsciously and quickly, and are swayed far more by emotional impact and immediate impressions.” Alex argued that marketing research has failed to keep up with the latest findings from psychology, from the works of:

The traditional concept assumed we think most of the time in what Kahneman calls System 2: logical, slow, tiring, considered thinking. In fact, we rely upon System 1 far more than realized: intuitive, fast, emotional, effortless, automatic thinking.

The traditional concept catered to System 2, trying to persuade with detailed benefits and RTBs. A System 1 concept “seduces with visuals that tell a story, and short, snappy text.” To be successful, a new product needs to activate behaviors: feeling (personal), copying (social), and framing (environmental). As Donald B. Calne, a neurologist, has said, “The essential difference between emotion and reason is that emotion leads to action while reason leads to conclusions.”

An intuitive, emotional brand connection will be more effective than a reasoned, rational concept. As Alex noted, consumers react more positively to seduction rather than persuasion. Andy from Hershey then took the microphone and showed us some concrete examples of the old school thinking, and the results that approach produced. He then shared the following example of a new type of ad concept:

Flash your smile into the Hershey’s Smile Sampler and receive a free treat!

The facial recognition machine will recognize when you are smiling, but if you aren’t smiling big enough, the machine will know and ask you to smile bigger!

The concept included a color sketch of the machine.

This concept tested so well that it was eventually produced as the Hershey® Smile Sampler: 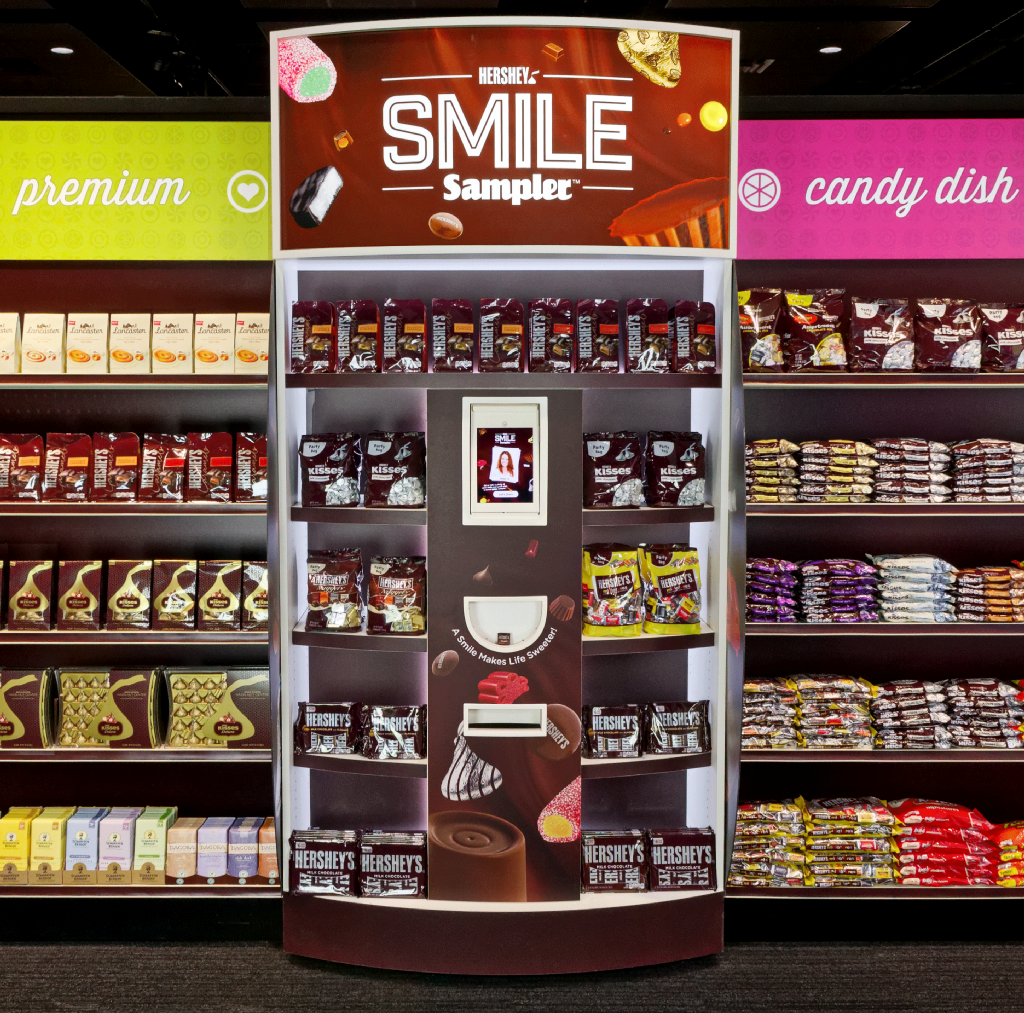 I found myself smiling as Andy discussed the insights that Hershey’s uncovered in their concept development. His descriptions resonated with me as I’m sure they would with most chocolate lovers.