U.S. 3D Cinema Infrastructure Up, But Revenues Down 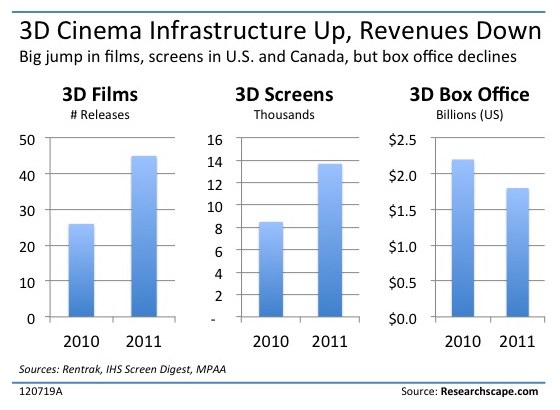 While 3D box office revenue represented only 18% of the $10.2 billion box office, 51% of U.S. and Canadian moviegoers saw at least one 3D movie in 2011, according to a dual-frame RDD sampled survey conducted for the MPAA by ORC Research. Younger moviegoers were more likely to have seen a 3D movie than older moviegoers and saw more 3D movies on average.

Researchscape manually coded the sentiment of 60 unique tweets about 3D movies, which revealed that 83% of the tweets were negative. Common complaints:

Tweets were downloaded from Twitter on July 14 and excluded retweets and tweets containing links.

(All numbers are rounded. Mintel did not report specifics about the survey methodology.)

The decline in 3D viewership is expected to continue for 2012. While overall 3D box office numbers are not yet available, the percent of U.S. 3D box office revenue that leading movies take in is on the decline, according to The Hollywood Reporter and Indiewire. From the high watermark of 83% of receipts being for 3D for Avatar, 3D receipts declined to just 32% for Brave so far this summer.

Looking at UK cinema, Mintel expects 3D box office to stabilize in the coming years at between 25% and 33% of total box office revenue.